Logistics firm DHL has formally opened a £3.8 million biomass burning facility at Gatwick Airport – which it is claimed is the ‘first of its kind in the world’ to treat Category 1 waste from international flights.Catering waste including food and packaging coming into the airport from non-EU flights is classed as ‘Category 1’ – which is deemed a high risk waste stream as it can contain animal by products which are required to be treated to strict safety standards.

Previously Gatwick had sent the estimated 2,200 tonnes of Category 1 waste received every year to hazardous waste landfill sites which were permitted to handle the material. The opening of the plant, which is located close to the airport’s north terminal, means that the material can be treated on-site and vehicle movements on and off the airport premises are reduced.

The site, which also houses a materials recycling facility for handling all of the waste generated from the airport’s in-terminal catering sites and waste from airlines, is operated by DHL Supply Chain, which began providing waste services for the airport in May 2016. 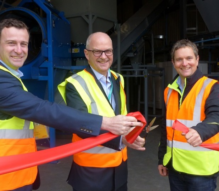 The plant uses an International Catering Waste-compliant biomass combustion system to treat the waste safely on-site. The Category 1 waste, along with other organic material is converted into energy to heat the waste site and Gatwick is also exploring plans for the facility to heat the airport’s North Terminal.

The treatment process for the organic waste has been developed by composting technology firm, Tidy Planet.

Organic material prepared for treatment initially passes through a shredder before then being dried using Tidy Planet’s ‘Gobi’ drying unit, which exposes the waste to high temperature to turn it into a powdered biomass fuel.

This dried powdered material is then passed through a rotary screen which removes any remaining packaging material from the mix – primarily plastic and foil – which is then treated using a specially developed biomass boiler, which is then used to heat the site. 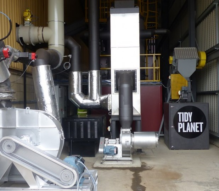 A small-scale MRF also located on the same site, where around 8,000 tonnes of commingled waste from the airport terminal’s catering businesses is handled. Around six pickers operate on the line to sort dry-recyclables from the waste, with any remaining organic material then passing through the biomass drying system alongside Category 1 waste.

The project is expected to save around £1,000 in energy, transport and waste management costs for every day it operates – with the process estimated to cost around £35 for every tonne of waste treated. A payback-time of between four and five years is anticipated for the site.

Opening the facility yesterday, Charles Kirwan-Taylor, Gatwick Airport’s corporate affairs and sustainability director, said that the site would help to improve the waste and energy efficiency of the Airport, as well as helping to meet the target to recycle 85% of the waste from the airport’s operations.

He added: “Over the course of the last 25 years we have nearly doubled our passenger numbers, but our overall footprint in carbon, water and waste is the same, or less than it was in the 1990s.”

Martin Willmor, senior vice president, specialist services, UK for DHL Supply Chain, added: “After a decade of working closely with Gatwick, we’re excited to still be finding innovative ways to improve operations across the airport. Disposing of Category 1 waste can be very costly and time-consuming, but our new waste management and recycling system is a huge step forward.

“Gatwick is leading the way in converting waste onsite into an energy source and we’re already investigating a number of further initiatives to support sustainable energy production and the future expansion of the airport.”